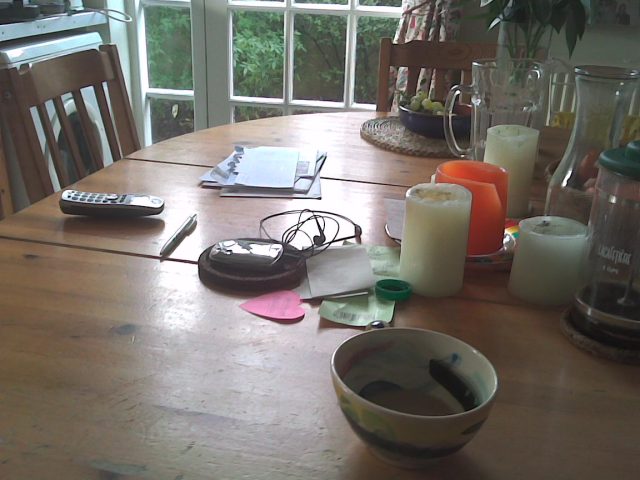 Yesterday I had the great pleasure of getting back in touch with Mark Robinson, poet, author and former editor of the late and wonderful Scratch magazine.

Mark had written to say that he had noticed he was in my Lifesaving Poems list and that he was chuffed to be next to Keats. Here is why I love Mark’s poetry and ‘Domestic Bliss’ in particular.

I chose ‘Domestic Bliss’ because it saved my life at a time that was incredibly exciting for me, around 1991. I had just rearranged my working life around reading and writing poetry, part of which process meant I had begun subscribing to a range of small press poetry magazines which were new to me. Scratch was one of these.

Also around this time I began running a writers and artists group called Bull, with my friend Luke Bretherton, in my kitchen in Brixton. For the price of a bottle of (usually very cheap red) wine friends of friends of friends could descend on our house and read/show/play their latest piece of work. As I say, all of this was new and exciting to me.

Up to this point I had written alone, in the dark and in secret. It had taken me a very long time to notice that no one knew my work because I was not showing it to anyone. Subscribing to magazines like Scratch and taking part in Bull were among the most the most formative experiences of my writing life, therefore. Suddenly I was in contact with people who cared about words and poems and metaphors in the same way I did. I realised I was not alone.

So I would send Mark my wry little poems about changing nappies and I would see his in Scratch and in other places like The North and The Wide Skirt. I liked them immediately because, as Kenneth Koch said about Frank O’Hara, there was nothing in them I did not like. There were references to the music of Mowtown and making curry, all shot through with a gentle cynicism which never overwhelmed the poems or threatened to become less than generous.

I love ‘Domestic Bliss’ because it reminds me of that time and because it is a lovely domestic poem that achieves much more than it appears to do, all in the space of 16 lines (or a glass of blackcurrant wine). I do think you would have to be from Mars not to be able to relate to what it describes. On a personal note I want to say that ‘The world is hard but worth it’ is one of the great last lines of any poem, and I wish I had written it.

‘Your smile leaps out from behind your teeth’ is not far behind.

The mess gets worse as the beautiful world
tries harder, expands on its original mistake –
something crass blurted out in a fluster –
making a mountain out of moleshit.

You and I aren’t bothered. Too busy to
beat the wolves back from the doorstep, too tired
to be pissed off at anything, tonight
the blackcurrant wine is dying our tongues

the colour of our hearts. We’re saying what we mean,
for once, and it feels good, making plans
for the future as if there were no tomorrow.
Your smile leaps out from behind your teeth.

We can do whatever we want.
What we want to do right now is
get sordid in front of the fire.
The world is hard but worth it.

from The Horse Burning Park (Stride)