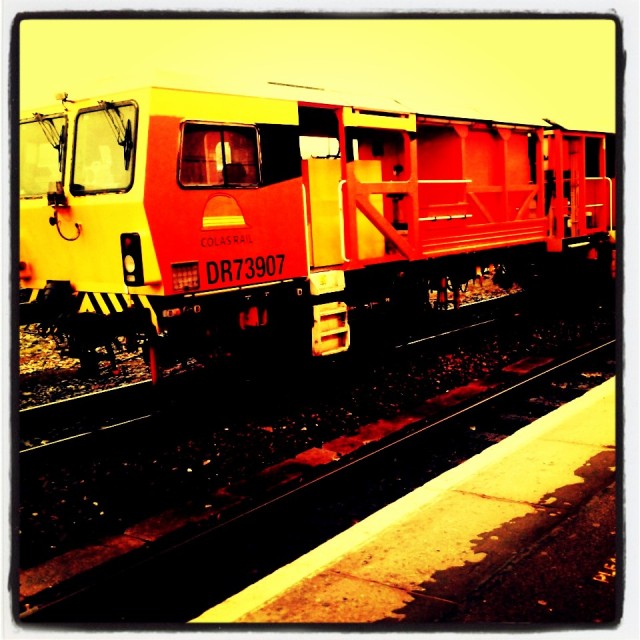 To celebrate the appearance of my dear friend Christopher Southgate at this year’s Greenbelt Festival, I am republishing my Lifesaving Poems post on his amazing High Fidelity, below.

The man sits above the tracks
at Bristol Parkway. He drinks tea,
studies the distance.
He notes the numbers of trains.

With the binocs he picks them out
on the long curve from Scotland,
the hard-driving run from Swindon.
He watches till the grey light fades.

He drinks tea and talks to himself
about the rude girls who serve him.
He takes some pills – perhaps the ones
the doctors make him take.

I note him down,
after my airport poems,
my studies of Sappho, Bathsheba,
and Sylvia Plath.

I ride one of his numbers home
impatient to be undisturbed with a malt
and my rank-ordering of all the available versions
of the Goldberg Variations,

from Easing the Gravity Field: Poems of Love and Science

I first heard Chris Southgate’s ‘High Fidelity’ sometime in 2005, when I was lucky enough to be part of a writers’ group with him. Every five weeks or so the poets in the group would meet in my kitchen over coffee and Danish to discuss poems which we were drafting. Each poet would read out their poem and then listen, in silence, while the rest of us made observations, comments and criticisms. Only when the rest of us had finished were authors allowed to respond. The format never changed.

It is practically the most useful thing I have ever done in my life.

The day Chris brought ‘High Fidelity’ was special, because I had the rare impression of hearing perfect art straight off the cuff as it were. When he finished reading my own response went something along the lines of -there is nothing to change, it’s done.

You can find it in his 2006 collection Easing the Gravity Field: Poems of Science and Love (Shoestring Press). I don’t think it has changed much, not that it needed to.

I love everything about this poem, from its calculated yet non-judgemental observations to its relish of language, and, by implication, finding the extraordinary in the ordinary. I love its humour -like Chris when you meet him, of the driest and most self-effacing kind, gently poking fun at the enterprise of note taking and writing poetry. I love the twist in the isolated final line, the link it makes to the man at the railway station; I love the community of this, and the silence.

If you do not know Chris’s work, I urge you to get hold of it. Last week he launched his new collection, A Gash in the Darkness. It is full of perfect poems like ‘High Fidelity’: wry, solid,  compassionate, and brimming with mystery. I should add that he is a wonderful reader of his work, really taking time to give his words space to breathe: if you have not heard him, you are in for a treat.