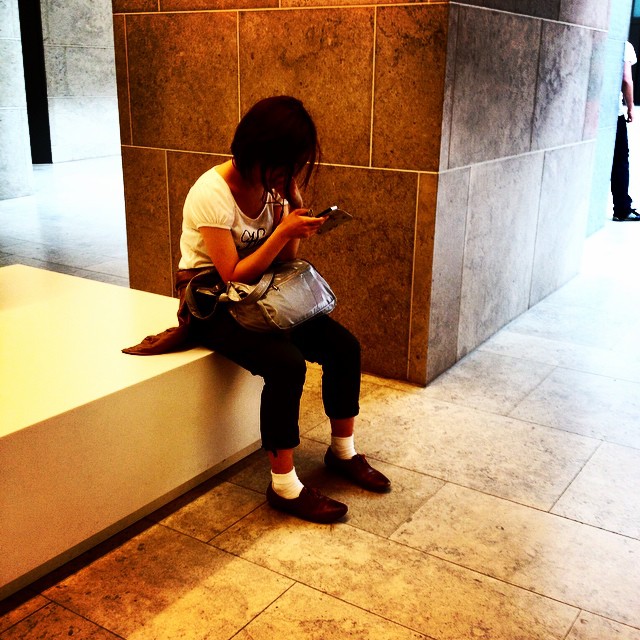 Or perhaps you’re waiting at the bus stop. You could text someone. But if you said ‘no’ to the text, you could focus instead on some aspect of the scenery around you -a tree, window, an old door- and allow it to become a meditation. You look at your chosen object, note it well and allow creation to speak.

It’s official. I have left Twitter. As I said a couple of days ago, this was a decision I came to all by myself, slowly and painfully over the summer. I came to realise that I was not really living. I looked back at the moments I had most enjoyed over the last year or so, and none of them involved social media.

In no particular order these included: sitting in a camp site reading Ilhan Berk for the first time; sitting with friends around a table with some wine; being alone and sitting in silence; going to the flicks; meeting up with my children; listening to poets reading their poems; actually finishing reading a book; being outdoors; nattering with my wife; having japes in my van; watching the sea; scribbling in a notebook; reconnecting with old friends; being spontaneous; looking at pictures; giving stuff away; sitting in silence; discovering Adélia Prado; teaching; trying to write poems.

Not much of that list -any of it, now I come to think of it- is to do with what we might call the front stage of life, the public stuff, the being at a thing, the being witty, the being on. Nearly all of it is private, social or semi-social, or even silent. So it dawned on me: if that is the stuff that feeds me, why am I not doing more of it?

Today is day three of the fast. By the time you read this it will be day five. The post announcing my decision only went live this morning. I can’t say I don’t know how it is doing because in my haste to delete the Twitter app from my phone I forgot to change my email settings. For a good hour or so I was seeing live tweets in my inbox, including a very touching one remarking on the fact that I would not be seeing its author’s reaction. My hunch is it has hit a nerve. I can’t be sure of course, because I am here, not there, looking around at me in this room, and at myself, dealing with that, not what X or Y thinks about it.

The honest truth is I did not know it would be this hard. Even though I have work to do I am climbing up the walls with distraction. It may be that I have gone too far too fast, but I don’t know. Steven Pressfield says in The War of Art that the greater Resistance we feel toward something, the surer we can be that it matters we do it. I didn’t know not looking at my stats, or not listening to 5Live while I make breakfast would be that hard either.