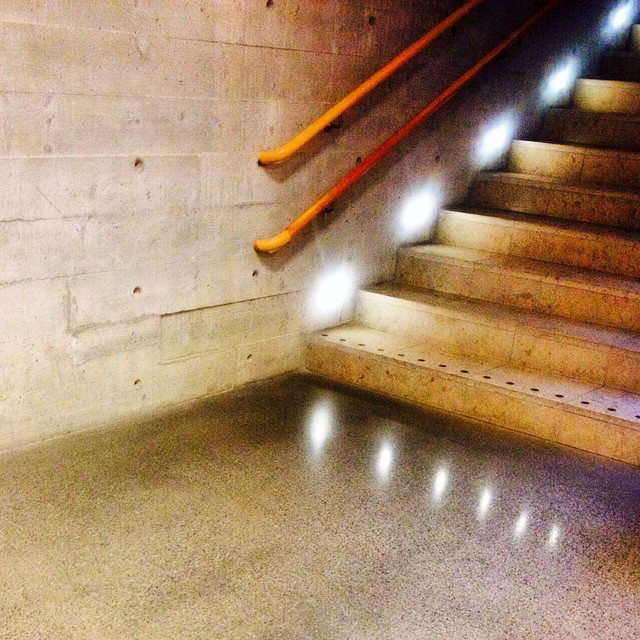 Two girls discover
the secret of life
in a sudden line of
poetry.

I who don’t know the
secret wrote
the line. They
told me

what line it was. No doubt
by now, more than a week
later, they have forgotten
the secret,

the line, the name of
the poem. I love them
for finding what
I can’t find,

and for loving me
for the line I wrote,
and for forgetting it
so that

a thousand times, till death
finds them, they may
discover it again, in other
lines

in other
happenings. And for
wanting to know it,
for

assuming there is
such a secret, yes,
for that
most of all.

I was at a thing. To be specific, a private, indoor thing, the afternoon quiet, the traffic momentarily abated.

A waiting room, in a house with many rooms. (This is not a coded reference to relapsing). With magazines, a ‘tell us what you think box’, and a sliding window, at which a person kept appearing to tell me they had lost my records. The room was probably the height of interior fashion in 1995. You know the kind of thing.

I could feel the magazines beckoning me. Pictures of the Royals, a ‘Return of Sleaze’ headline from June 2013. (I didn’t remember this either). I admit it, I reached for the pile. Surface tension being what it is, the pile of magazines shifted away from me, revealing a single side of laminated A4 submerged at the bottom of the pile.

The acres of blank space were unmistakable. A poem. Here, in this waiting room. Put there by the lovely people at Poems in the Waiting Room, who do what they say on the tin.

I read ‘The Secret’ there, silently, in secret. A poem about reading, about remembering what has been read, about entering into a conversation with it, via others, in an effort to somehow make it permanent, this winged and sacred moment.

That poem, in that waiting room, waiting for me, under some old magazines.

And now here I was reading it, gulping it down, thinking Yes and Yes! and YES! as it enacted its meanings inside my tired head. A poem about a poet loving her readers enough to admit that she is not in control of the meanings they make of her poem, her stumbling on this truth allowing her the freedom to claim they are similarly not in control. A poem of gratitude and of love, for people she would never meet.

One poem, in a waiting room, of an innocent Thursday afternoon. The entire complexion of the day altered, even as the man told me a third time he had no record of me, even as I allowed the silence of my non-existence to settle, my appointment still ahead of me, suddenly less alone.

If you liked this, why not try Elizabeth Bishop’s ‘Poem’ or Naomi Shihab Nye’s ‘The Art of Disappearing’