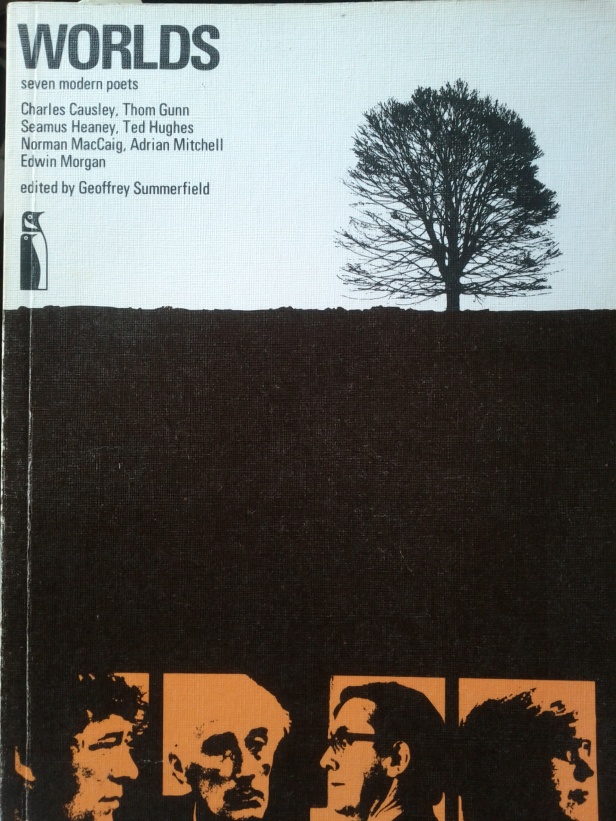 As I have said before, Geoffrey Summerfield’s Worlds (Penguin, 1974) is one of the most important books of my life. It was the first book of poems I remember buying with my own money. I was in my mid-teens at the time. I bought it because we had done a bit of Ted Hughes at school and I liked what I had seen there (‘Pike’, ‘Retired Colonel’, ‘Thistles’). I’d also seen a poem of Thom Gunn’s, ‘Considering the Snail’, and I had liked that too.

The others I had not heard of. I guessed if they were good enough to be with Hughes and Gunn then that was a good sign.

If I’m honest I think I bought the book as much for its photographs as for its poems. There were wonderful intimate shots of poets not looking like poets (in the case of Ted Hughes, none whatsoever), MacCaig lighting up in a pub for instance, and Adrian Mitchell giving a reading in one. There were a lot of shots of pubs, now I think of it.

I remember being fascinated in particular by the living arrangements of the poets, so far as they had been portrayed. They all, without exception, seemed scrupulously tidy. This really appealed to me. I am sure I had picked up from somewhere that all poets lived in chaos. For a while I confused MacCaig’s living room with that of Edwin Morgan. There was something frugal about both which, though filled with books and paintings, still spoke of devotion to thinking and writing. Or so it seemed to me at the time.

For a while this mistaken identity crossed over into my reading of the poems. I was convinced for a short time that ‘One Cigarette’ belonged to MacCaig, not thinking to read to the end of the book to rediscover it in Morgan’s section of the anthology. Just as I felt relieved to see I had not lost the poem, I also felt stupid to have lost it in the first place.

But not as stupid as when I made the discovery, years later, that Morgan was gay, and that ‘One Cigarette’ had not been written, as I has assumed, for a woman, in an era when to be open about such things was dangerous. I became aware of two different kinds of knowledge now coming into contact with each other. This new knowledge about the poet’s life and the even fiercer certainty that I absolutely loved the poem and knew it had been written for me.

Isn’t that what all great love poems do?

From the deliberate flirtation with cliché in the first line to its more subtle playing with smoke ‘signals’, I was hooked. ‘One cigarette/in the non-smoker’s tray’: how devastating I found that an image of being taken over by another. I wanted this for myself, badly. I wanted to be ‘drunk’ on someone’s ‘tobacco lips’; I wanted smoke to blow ‘winding into my face’. The falling ash ‘among the flowers of brass’, they were for another day.

It was the first poem that showed me the mirror of what love was like. There wasn’t a man or a woman man staring back, nor even a Glaswegian poet, but me, speaking with my voice.

No smoke without you, my fire.
After you left,
your cigarette glowed on in my ashtray
and sent up a long thread of such quiet grey
I smiled to wonder who would believe its signal
of so much love. One cigarette
in the non-smoker’s tray.
As the last spire
trembles up, a sudden draught
blows it winding into my face.
Is it smell, is it taste?
You are here again, and I am drunk on your tobacco lips.
Out with the light.
Let the smoke lie back in the dark.
Till I hear the very ash
sigh down among the flowers of brass
I’ll breathe, and long past midnight, your last kiss.