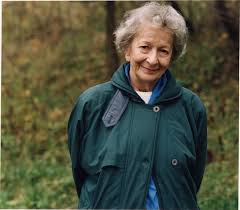 This week saw the death of poet and Nobel Laureate Wislawa Szmborska. She was 88. Her compatriot Czeslaw Milosz described her work as having a despairing vision, while offering ‘a world where one can breathe’.

An ordinary miracle:
in the dead of night
the barking of invisible dogs.

One miracle out of many:
a small, airy cloud
yet it can block a large and heavy moon.

Several miracles in one:
an alder tree reflected in the water,
and that it’s backwards left to right
and that it grows there, crown down
and never reaches the bottom,
even though the water is shallow.

Second to none:
just this orchard
from just that seed.

A miracle without a cape and top hat:
scattering white doves.

A miracle, for what else could you call it:
today the sun rose at three-fourteen
and will set at eight-o-one.

A miracle, less surprising than it should be:
even though the hand has fewer than six fingers,
it still has more than four.

A miracle, just take a look around:
the world is everywhere.

An additional miracle, as everything is additional:
the unthinkable
is thinkable.