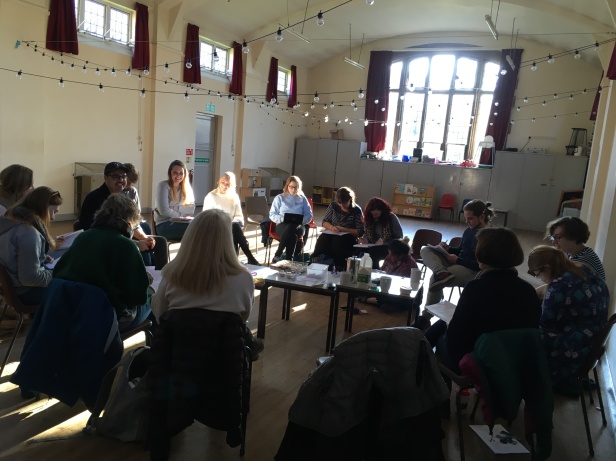 Today I had one of the most precious teaching experiences of my life. Because we are taking strike action a colleague and I decided to offer a teach out session in a local church hall down the road from the campus where we normally work. We emailed students the week before to let them know where we would be and when. Not having looked at email because of our strike action, we had no idea if any of them would join us or what the response would be like. We were clear that the sessions would add to their knowledge of teaching, but that these would not be replacement sessions in the strict sense.

Having picketed at the campus gates from 8.30, we arrived at the hall in the late morning. Some brave souls who had joined us for the early shift walked with us. We set up chairs and a few small tables, filled an urn with some water, and away we went. Just entering and setting up shop within the space, it felt as though a shift was taking place. No one was in a hurry. Cakes, mince pies and other goodies were shared round. Crucially, we sat in a circle, a gentle and unasked-for riposte to our usual classroom layout of desks in nests all facing the front of the room. Neither of us brought in a PowerPoint. 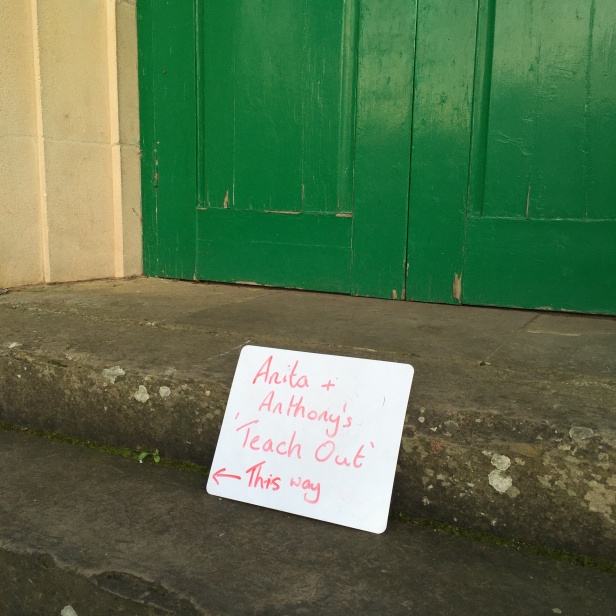 We did some creative writing around the topic of personifying emotions. We shared and discussed our work. We had a brief break for coffee and then explored approaches to teaching philosophy for children. Around lunchtime some students left us for sessions on campus, one ran out to put more money in the car park meter, and some new colleagues joined us for the afternoon. Time felt elastic, open-ended. I became aware I was no longer in charge, but a fellow-participant. ‘Each time I look round at you, Anthony, you seem to be wearing more layers,’ somebody said. Her remark set me thinking about the way I normally present myself in a classroom, not a suit and tie persona exactly, but tidy, certainly, definitely professional. Instead, today I was dressed for the cold, my Michelin Man proportions hidden beneath my big coat. It didn’t take long for me to grow into my new role: I accepted every mince pie that came my way. Perhaps all of my teaching should be like this?

Snatching a moment of daydream during the writing exercise, I caught site of my equipment in the corner. Not my usual rucksack with its pockets for pens and USB sticks, but a canvas beach bag, in which I had brought milk, a couple of cafetières, some teabags and an improbable banana. Everything about the day was softer, less hurried, but just as focussed. We said we would finish at 3.00, but were still there at half-past, answering questions, off piste as ever, about essays, writing, resources. We washed up our mugs, put the chairs away and stepped into the late sunshine. You wouldn’t have known we had been there.