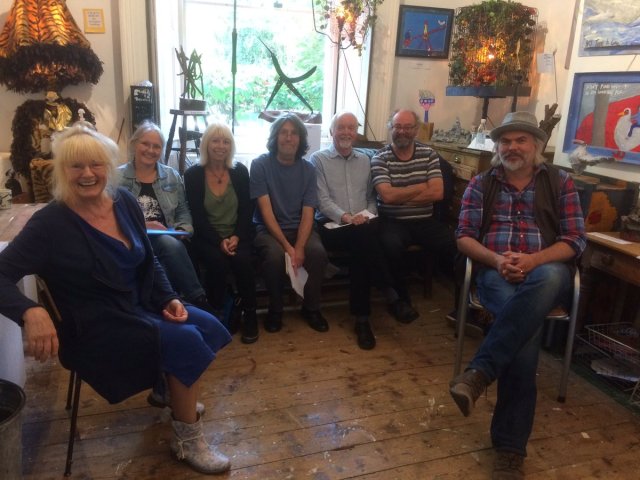 Last Sunday I attended the last ever group meeting and reading of the Mincing Poets, in Exeter. A classic of its type, nine readers, each sticking to a strict ten minutes, a long first half followed by a slightly shorter second, with tea and cake in the interval. We met at Gallery 36, that eclectic and welcoming space curated and lived in by Veronica Gosling, whose art-work covered the walls, sending the eye darting in the gaps between poems and poets, the connections blossoming naturally to the references to the art movements referenced in the poems. If that makes it sound dry and a bit academic, it was anything but. In the next door room Damian’s daughter went down for a nap; during the second half Fiona’s kids made faces at the window; there was much laughter.

A project born out of a reading (some of us said 2005, others 2006) at the Picture House bar, where most of us heard for the first time, and were knocked out by, Fiona reading her poems. My memory of that time is sketchy at best. I was coming back into society very slowly, having spent that year being treated for non-Hodgkin’s lymphoma. Crowds, always a test, made me ultra-nervous. If I made it through the afternoon, a page of a novel, or even a stroll by the river without crying, it was a good day. Crowds of poets, though, that is a different kind of fish. Somehow the proverbial questions (‘Are you writing?’/’How’s the writing going?’) seemed superfluous. ‘It’s so good to see you!’ people said, and I knew for once they meant it. Ann was there, and we caught up after a long absence. There was a lot to catch up on. Crucially, Damian was there too, the friendship he shared with Ann going back even further and now rekindled after an even longer layoff. What was it Ann said, something along the lines of ‘When I first met him he was a boy’?

Out of this chance, some would say serendipitous, meeting, the group took shape. I must have emailed a friend, who became known as The Man With No Name, and he showed up at Fiona’s place, on Mincinglake Road, from which, obviously, the group now had to take their name. Listening to Damian and Ann reminisce as they introduced each poet I thought back to the time I was in a band, the stories and mythologies that get created in such an enterprise, their telling, retelling, mistelling, passing on, exaggerated perhaps, but somehow always telling the truth. In-jokes. Laughter. Not a hint of a squabble.

A first half, followed by a second half. Nine poets, with others not able to make it, (Tinker, Rachel), and Fiona choosing to sit in the audience: Ann, Damian, Chrissie, Helen, Annie, Alasdair, David, Mark, and, completely undeservedly, me. I’m not being falsely modest here. I attended the group once. Still unsure of myself at social gatherings, I had forgotten the protocols of how to comport myself at a workshop. To their credit, this did not seem a deal breaker to the group, who faithfully kept me on the email list, even when I had long ago given up ambition of ever going again, or thinking I had something to bring.

These things do not last forever, Ann said. And she is right. I was once in another group with her, which lasted for its season, coming to its end just as we seemed to recognise it had without much of word being spoken about it. Of course we did, we needed to, you need to say goodbye properly. But this, this farewell, felt like different fish. The last poet to read was the one who had shown least commitment to the cause, unexpectedly (and completely predictably) finding the whole thing moving beyond words. What an act of grace, I thought. How generous, and how kind. It’s quite a thing, I said, to be known by these people, just to have been known by them, people you know, and like, and admire. It’s quite a thing just to be in the same room as them, let alone to read with them. I am honoured beyond words.